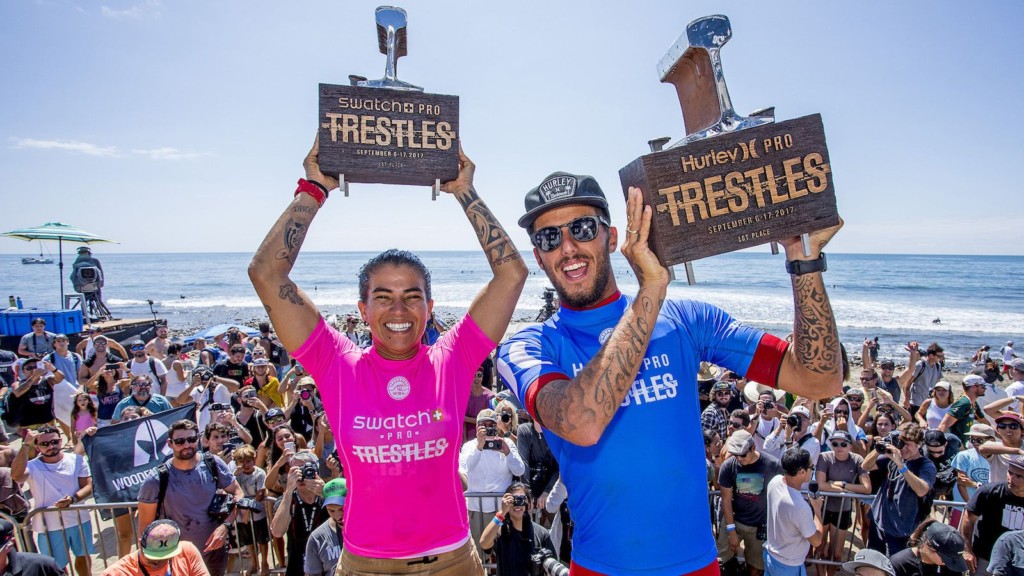 Filipe Toledo and Silvana Lima claimed victory at the Hurley Pro and Swatch Pro at Trestles in three-to-four foot waves at the famed cobblestone break of Lower Trestles.

Lima’s win over CT Sophomore Keely Andrew in the Final came after a thrilling week of competition at Stop No. 7 of the World Surf League Championship Tour, while Stop No. 8 saw Toledo defeat defending event winner and current World No. 1 Jordy Smith in the Final for a Brazilian sweep.

Toledo put on spectacular performances for the San Clemente crowd with his powerful turns and big airs throughout the event. Today’s Final Series witnessed Toledo continue to turn up the heat en route to the 5th CT victory of his career. Prior to taking down Smith in the heated Final match-up, Toledo knocked out 2016 WSL Champion John John Florence in the Semifinals and Kanoa Igarashi in the Quarterfinals.

“Finally! This is a very special moment right now,” said Toledo. “I always get stopped in the Semis and beating Jordy, the one who beat me last time, is an incredible feeling. I’m so thankful for all my friends to be here and thank God for all the waves he sent to me. This event is always so entertaining to watch. I am so excited to win with my friends and family all here.”

Toledo, who earned first place at the Corona Open J-Bay, is now the only male surfer to win two CT events this season. The Brazilian is now back in the World Title conversation, as his result improves his ranking by two spots up 7th on the Jeep Leaderboard.

“The World Title is definitely my main goal and it feels really amazing to be the only one to win two events of the year,” continued Toledo. “It’s been a crazy run for the World Title and I think it’s going to be one of the best once we get toward the last event — and I’m going to be there. Family means a lot to me and especially now with a second baby coming, it feels amazing to have them here and this is for them.”

Although Smith was not able to defend his event win, the runner-up result will keep him in the Jeep Leader Jersey with 45,850 points on the leaderboard. The South African is 2,450 points above No. 2 Florence and 8,650 points above No. 3 Julian Wilson. Smith will now prepare to best last year’s 25th place finish at the Quiksilver Pro France.

“I would’ve liked to get a couple more waves in that heat, but today wasn’t my day, unfortunately, and Filipe just surfed really well,” Smith said. “I went out there with a strategy and executed it pretty much as perfectly as I could, but in surfing, there are some things you can’t control and that’s Mother Nature. In that 35-minutes, I just didn’t get a second chance. Now I will just try to focus on the next one and live every moment for what it is and what’s to come. It’s time to get ready for Europe where it’s very happy-go-lucky and I like just roaming those lineups and just being there.”

The Swatch Pro Final saw a dominant performance from Lima, who claimed a massive win over Andrew by putting her in a combination situation with nearly half the heat remaining. Lima’s showcased her formidable forehand throughout the week and earned two more excellent scores in the Final, an 8.67 and 8.93. Andrew did her best to fight back, but couldn’t find a score greater than a 6.00 to give herself an opportunity to strike back in the final minutes — crowning Lima the 2017 Swatch Pro victor.

“I still can’t believe I won over here,” Lima said. “All I could think about after the last event was coming here to Lowers. It’s my favorite wave on tour because I can surf how I like, do turns how I like and I just had to keep going. Heading into that Final it took me back to my last Final at Bells and I just wanted to smash it. When it came down to the last five minutes having Keely in a combination, I realized I won and couldn’t believe it.”

Lima now moves from No. 15 to No. 13 on the Jeep Leaderboard with her first CT victory since 2010. The CT veteran requalified for the elite tour this year after falling off in 2016 and has found much success on the WSL Qualifying Series. The 32-year-old has struggled to advance out of the early CT rounds in 2017, despite her success on the QS. Now with her fourth CT victory, the Brazilian has reestablished her rhythm CT level.

“It’s just incredible,” Lima added. “I just feel so much confidence and I came here thinking I want to get a Lowers tattoo if I win, so my next one is the train. I just had to believe in God. He knows you, he knows your time and I was just waiting, but this is my time. I’ve gotten so much confidence from the QS and being at the top of the rankings there has really helped me be able to relax and let loose on the CT. All I wanted to do was have fun out there and do my best.”

Andrew’s runner-up finish marks her best CT result so far of her young career after incredible performances throughout the week. The Sunshine Coast, Australia, native’s first CT Final may not have gone as planned, but her run to make it there was nothing short of brilliant after eliminating World Title contender Courtney Conlogue in the Semifinals to earn one of the event’s biggest upsets. The 22-year-old’s jaw-dropping Quarterfinal heat over Sage Erickson helped pave the way for her result that sees her amass 8,000 points. The 2016 Rookie of the Year now moves to No. 11 on the Jeep Leaderboard — just one spot from the re-qualification cutoff.

“I was just happy to get into the Semis, but to make it back out there for one more heat and surf Lowers with just one other person out was pretty special,” Andrew said. “Having it against Silvana was great. She’s one of my favorite surfers on tour. She’s just so tenacious and I was just happy to assert myself on the tour finally. Yesterday was great being able to put a heat together, and I got two of the best waves of my life at Trestles. I’m feeling good with some good boards under my feet and I just want to keep making heats and be in that Top 10 by the end of the year. My backup plan is in place with my rating on the QS, so it feels good heading into the backend of the year with some opportunity to open up a bit earlier on this season.”

Semifinal 1 saw eventual winner Lima dispatch Californian Lakey Peterson. Peterson, who earned the highest heat total of the event yesterday, was not able to find the same 9-point rides and exits with a 3rd place finish, her best since the Rip Curl Pro Bells Beach earlier this year. Peterson now moves from 10th to 8th on the Jeep Leaderboard.

A massive upset unfolded in Semifinal 2 as Andrew took down an in-form Conlogue on her final wave, where she garnered an excellent 8.10 (needing a 7.84). Conlogue did not better her situation on the previous wave ridden to force the issue on Andrew. Conlogue now leaves Lowers with an equal 3rd place finish.

The women now head to Cascais, Portugal where Sally Fitzgibbons will sport the Jeep Leader Jersey. Conlogue moves to second going into the Cascais Women’s Pro, where she will look for a third-consecutive event win. Now No. 3 Tyler Wright is only 400 points behind Fitzgibbons to further heat up the 2017 World Title race.

The next event on the 2017 WSL Championship Tour will be the Cascais Women’s Pro, which will see the world’s best female surfers head to Portugal from September 27 to October 5, 2017.